The Extractive Industries Transparency Initiative’s (EITI) Board today announced that former Prime Minister of New Zealand Helen Clark is confirmed as the nominee to chair the EITI.

The former Prime Minister will assume her position following the EITI’s Members’ Meeting [1], to be held on 17 June in Paris. Helen Clark will be replacing…

Conference set to draw 1,000 collective governance supporters and practitioners in a time of rising polarisation.

The Government of France and the EITI today confirmed that the 2019 EITI Global Conference will take place on 18-19 June at the OECD Conference Centre in Paris. The Conference will provide an opportunity for heads of state, civil society activists and industry leaders to discuss emerging trends and best practices in the good governance of natural…

In December, the Afghan Ministry of Mines and Petroleum launched a Transparency Portal at the government media information centre in Kabul. It was attended by Afghan civil society members and journalists. The event was broadcasted on national TV and streamed live on several media channels. The Ministry’s senior leadership, including Hon Minister Nargis Nehan spoke about how the Transparency Portal aimed to improve confidence among investors, as well as the public, who could now see all… 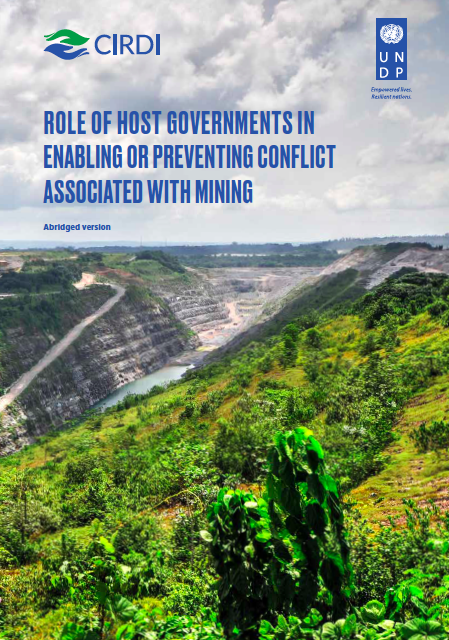 In some regions in the Global South, mining is seen as an important vehicle for generating wealth and improving local development. Yet, if managed poorly, mining can also lead to environmental degradation, displaced populations, increased inequality and social conflict. Experts…

‘What’s In It for Me?’ - Strengthening Accountability of Companies and Local Government through Citizen Feedback in Mining Areas

Liberia is home to some of Africa’s largest mineral resource deposits such as iron ore, gold and diamonds. Yet decades of poor resource governance have ensured these resources have not contributed to the public good. While the proper management of the country’s mineral wealth has the potential to transform the economy through financing infrastructure development and job creation, systemic problems of transparency and…

The Regional Resource Governance in West Africa (ReGo) Programme, funded by German Development Cooperation and implemented by Deutsche Gesellschaft für Internationale Zusammenarbeit (GIZ) GmbH, strengthens the investigative skills of 34 local journalists in three countries to report on the impacts of the mining sector and contribute to a well-informed public debate.

Reporting on the mining sector does not only require awareness of the subject, but…

Was 2017 the year of Peak Indian Coal? - co authored with Pooja Chatterjee Like it or not, coal has a special place in India.

According to the Indian Supreme Court. (Indian Supreme Court, 2012, 1), ‘Coal is king and paramount Lord of industry is an old saying in the industrial world.. In India, coal is the most important indigenous energy resource and remains the dominant fuel for power generation and many…

With the new gas discoveries in East Africa and in the Levantine Basin has come the need for countries involved to better understand the gas value chain and how to structure complex and capital intensive Liquefied Natural Gas (LNG) projects for the benefit of the country.
Having a fiscal model is key to enable this understanding.

Thomas Mitro (CCSI's senior fellow) and CCSI have built the …

Ebook on Brexit and International Development The 1975 film The Rocky Horror Picture Show tells the story of a newly engaged couple, Janet and Brad, who end up lost, disorientated and with a…

Tax Incentives in Mining: Open for business or abuse?

New research by the IGF and the Organisation for Economic Co-operation and Development (OECD) has found that many resource-rich developing countries use tax incentives in the hope of attracting mining investment. Roughly two thirds of the countries surveyed give corporate income tax concessions to mining investors either in the law or in mining contracts, or, in many cases, in both. Slightly less than half grant a complete tax-free period (“tax holiday”), wiping out the entire tax base for…