A three-part webinar series on human rights, environment and biodiversity There has been a lot of comments about the movie "Black Panther" recently. Even though fictional, the movie does remind the public about the importance of good resource management.

I would like to share two blogs from my colleague Nicola Woodroffe and myself at NRGI, on two aspects of resource governance that transpired in the movie:…

A withhold up in Mongolia? Thoughts on the renewed tax debate around Oyu Tolgoi

Governments of mining countries are vulnerable to investors using double tax agreements (DTAs) as a means of avoiding paying taxes. DTAs are bilateral, or multilateral agreements between countries that set out which country has the right to collect tax on different types of income. Interest expense on foreign loans is one such source of income. The DTA will specify how much tax the source country can collect on the interest paid by the local mining subsidiary, to its affiliate, usually in a…

Poverty, mining and conflict in Afghanistan

Afghanistan’s decades long conflict and ensuing destruction has made many of its citizens nostalgic about relative peace under the old monarchy. Today over 39 percent of the population lives under dire poverty rendering them ineffective in many realms of life . Poverty is more prevalent in rural areas because of lack of economic opportunities and insecurity and they have complicated the security situation. The government is acutely dependent on foreign donations, despite 17 long years of…

The new face of informality in the Tanzanian mineral economy Artisanal and small-scale mining (ASM) has long been a mainstay of Tanzania’s rural economy, contributing to the livelihoods of more than three million Tanzanians. ASM is nonetheless yet to realise its full development potential, with the sub-sector continuing to be beset by social, environmental and economic…

"Our efforts in beneficial ownership transparency have been important"

I have been a member of the EITI Executive Committee from its creation in 2007 until today. Over the last ten years I have participated regularly in our multi-stakeholder dialogue and have witnessed DRC EITI grow from strength to strength as it has…

(excerpt from an unpublished paper: Mining at the Crossroads of Law and Development: A review of labor-related local content provisions in Africa's mining laws through the prism of automation.” – Nneoma V. Nwogu

Automation in mining is the substantive reduction and potential elimination of human labor from day to day mining operations.  Research, development and use of automated machinery in isolated components of mining equipment and machinery…

PDAC 2018 and the bright future for the mining industry

For more blog posts, news and updates in the energy and extractive industries: www.ieeblog.com

A few days ago, the Prospectors and Developers Association of Canada (PDAC) organized its annual…

The OECD Development Centre is seeking public comment on the advanced draft of the Guiding Principles for Durable Extractive Contracts.

The Guiding Principles set out eight principles and supporting commentary that host governments and investors can use as a common reference for future negotiations of enduring, sustainable and mutually beneficial extractive contracts. They aim to provide guidance for the content and negotiation of durable extractive contracts that…

Meeting the world's sustainable development needs will require a considerable increase of FDI flows, especially of "sustainable investment" flows, i.e., investment that exhibits certain "sustainability characteristics": the economic, social, environmental, and governance contributions that governments expect MNEs to make to the development of host countries, and that MNEs (or their organizations) themselves say they seek to make to host countries' development. Based on…

Artisanal and Small-Scale Mining Training: An interview with John Tychsen

Ecuador commits to implement the EITI

On 5 March Ecuador’s Mining Minister Rebeca Illescas committed to implement the EITI Standard. The commitment was made at “Ecuador Day” at the PDAC in Toronto on 5 March. Minister Illescas stressed that joining the EITI is “ very important for the…

Have women been left behind in the transparency and accountability agenda? 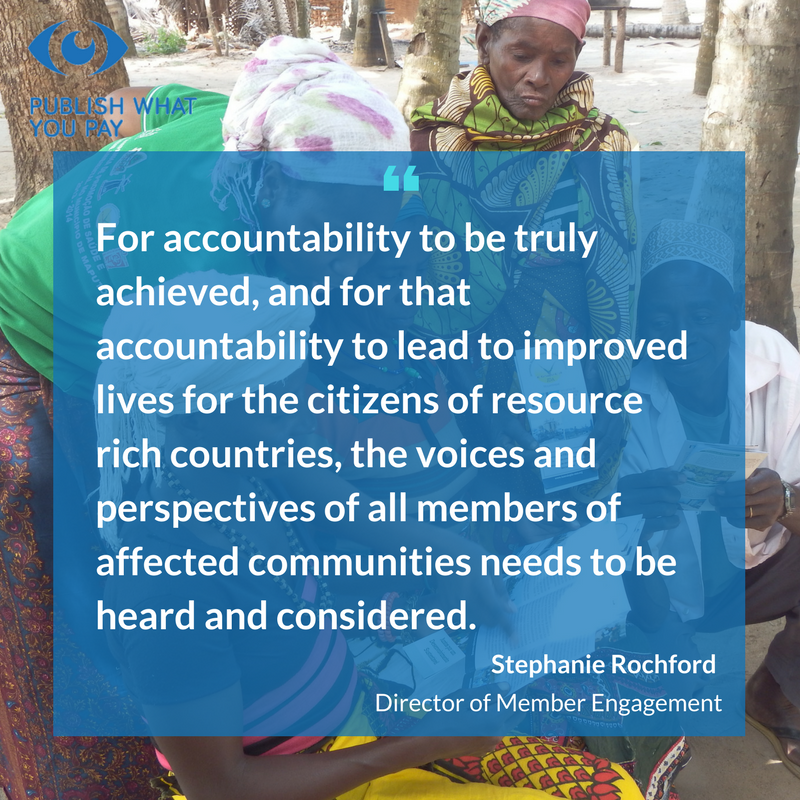 “How can we effect change in the world when only half of it is invited or feels welcome to participate in the conversation?”

Jakarta – National Coalition Publish What You Pay (PWYP) Indonesia applauds the Presidential Decree Number 13 Year 2018 about Principle of Recognizing Beneficial Ownership of Corporation in the Framework of Prevention and Eradication of Criminal Act on Money Laundering and Criminal on Terrorism Funding. This rule requires every corporation (such as LLCs, foundations, associations, CVs, firms, and…

As part of our partnership with Uongozi, CCSI has written a brief that assesses the international gas outlook and long-term implications for the development of Tanzania's offshore gas deposits. As the country looks to use a proportion of the gas domestically to support its development strategy, the brief places particular focus on issues that need to be considered in the final negotiations related to the arrangements of the domestic gas allocation.

We find that Tanzania's gas…

The news that Lebanon had finally signed a contract for gas exploration in its offshore has set off a flurry of speculation in national and international media. A leading bank in the country produced a report suggesting the government could earn up to $200 billion in revenues from the deal, turn the public deficit into a surplus…

On this International Women’s Day, we at NRGI are drawing inspiration from women’s movements and paying attention to ways we can work toward equal participation in extractives management.

Players in the resource governance movement has been working incrementally on the subject, from Publish What You Pay’s Extracting Equality – A Guide to…

There was an estimated 40 million people working in artisanal and small-scale mining (ASM) in 2017, with an additional 150 million individuals across 80 countries dependant on ASM as part of their livelihood strategies.

Women represent a large percentage of the ASM workforce—40 to 50 per cent in Africa alone, in fact—working in a range of roles…