This is the 4th blog from the How is industry adjusting to persistently lower commodity prices? What does it mean for good governance prospects?  GOXI mini-series

From 2002 to 2013, resource-rich countries in Africa enjoyed the benefits of a commodity boom, using increased revenues to embark on major infrastructure projects in roads, rail, ports, and housing. But when commodity prices fell starting in 2011 (see figure below), public sector revenues took a major hit with private sector companies scaling back operations, delaying investment decisions and suspending unprofitable operations. Especially as the number and size of investments in the sector contracted, Governments felt increased pressure to collect, manage and spend those revenues more efficiently. As a result, the fall in commodity prices and mounting economic pressure actually led to opportunities to improve governance of the extractives sector. The result in a number of resource-rich countries has been efforts to improve laws and increase focus on implementing existing laws. There is evidence of some success in reducing corruption in the sector.

Sierra Leone is one such resource dependent country. Minerals, primarily iron ore, account for over 70% of the country’s exports. Iron ore prices fell from a five-year average during the boom years of $140-$170 per metric ton (depending on the ore grade) to $40-50 in 2015. London mining, the second largest iron ore mine in Sierra Leone collapsed in 2014 and the larger operator, African Minerals, collapsed a few months later. Total royalty payments from the five largest companies fell from $31 million in 2014 to only $9.25m in 2015. The situation was compounded by a raging Ebola epidemic, whose control measures effectively paralyzed significant sections of the economy. Contractors supplying goods and services to the iron ore and mining sector, for example, temporarily ceased operations. Companies embarked in cost reduction measures by cutting down on operating costs through more rigorous controls, delays in recruitment, reducing expatriate staff, cutting corporate social responsibility payments and renegotiating contracts with service providers and suppliers. Without exception, companies also requested concessions to their tax and debt repayment obligations.

These impacts led to an improvement of regulatory quality and government effectiveness due to the following reasons: First, the sharp cut in the budget and correspondingly in public expenditures increased the pressure on the Government to manage its more limited revenues more efficiently. Second, due to the budgetary pressures, the National Revenue Authority (NRA) was asked to meet and surpass its annual revenue collection targets. The NRA launched a series of actions to collect statutory taxes with an emphasis on the mining sector. A multi-ministerial task force was set up to ensure companies comply with their tax obligations, through greater scrutiny and by closing loopholes through which potential revenues were lost. Issues such as bureaucratic inefficiencies, poor coordination and limited scrutiny of accounts were addressed.  The Government also proactively engaged companies to better understand their plans in order to improve revenue projections.

Third, although not a government response, there was a sharp fall in issuance of exploration licenses as a result of the global commodity price downturn. Only 11 new exploration licenses were issued in 2015 compared to 60 in 2011. While this development is a blow to further mineral discoveries, it allowed the Government to increase scrutiny of the fewer new and remaining companies’ compliance with statutory obligations in the quest to maximize tax revenues.

One key obstacle to improving governance in the extractive sector of Sierra Leone has been the absence of effective checks and balances of Governmental authority within the legal framework, which has led to corruption allegations in the past. The country is in the process of revising its mineral policy, that is to address some of these weaknesses. While this policy has yet to be adopted, it is unlikely that during the boom years such changes would have been so easily accepted given that there were stronger incentives by those benefitting from more discretionary power to keep these rules in place. Simultaneously, transparency has improved and now all mining agreements are published on the website of the National Minerals Agency and regular bulletins are issued on the sector’s activities.

In sum, the commodity price fall has not led to a fall in good governance in Sierra Leone. On the contrary, there are several factors including greater transparency, improved enforcement of government regulation and enhanced government efficiency in tax collection and spending, which have led to an improvement in governance of the sector.

This analysis therefore suggests that while the commodity price drop is having a disastrous impact on the finances of many resource rich countries, it has not necessarily resulted in worsening governance in the sector. While the improved governance indicators are likely due in part to factors outside of price levels, including the expansion of EITI participation, the growing internationalization of anti-corruption norms, and other factors, they nonetheless show that countries can and have continued to make advances on good governance regardless of price levels, and indeed that lower prices might provide greater incentives, pressures and opportunities for such reforms. With improved institutions and mechanisms in place, there is hope that these countries will be better equipped to spend the revenues from the next commodity price upturn more efficiently than during the last commodity super cycle. 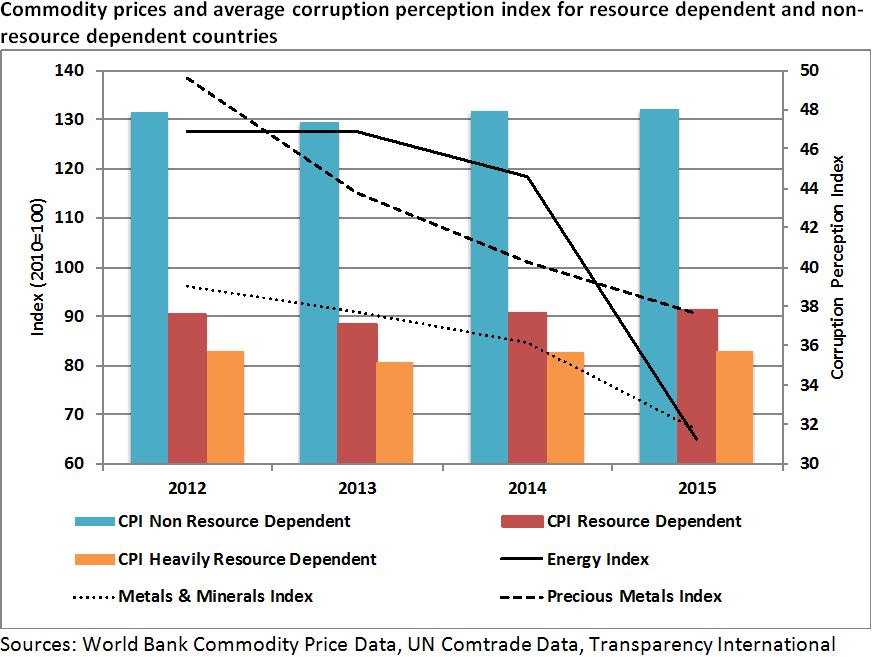 Anthonsen, Mette and Asa Lofgren and Kals Nilsson, 2009, “ Natural Resourse Dependency and Quality of Government”, Working Papers in Economics, No 415.

[1] A CPI of 0 signifies “highly corrupt” and a CPI of 100 “very clean”. The corruption perception index was used as a proxy for good governance due to the availability of the 2015 data point. 2012 was chosen over 2011 as the starting point, because there has been a change in methodology in the way that the CPI is computed, which makes a pre-2012 time-series assessment difficult. It would be interesting to redo this analysis with the updated resource governance index instead of the CPI to focus specifically on the extractives sector. For instance, there was a marginal increase in perception of corruption recorded in the latest CPI for Sierra Leone, but this is largely explained by the Auditor General’s report of 2014 on the use of Ebola funds that generated considerable public outcry and not on governance of the extractive sector.

[3] For an explanation as to why resource dependent countries may be more prone to corruption see for example Anthonsen et. al (2009) and Bhattacharyya (2010).

[5] Defined as 50% or more of total exports being made up of oil, gas and/or minerals.

thank you for your comments and we agree with your observations that the price fall does not necessarily lead to better governance and that not all governance improvements can be attributed to the price downturn. The CPI actually falls in some resource rich countries during that timeframe (we are happy to share the underlying calculations with you if interested). As mentioned in the blog and also in response to Kristian's comment, we are also not suggesting causation. A more stringent econometric analysis was beyond the scope of the blog and not possible with the dataset of limited observations since the fall in commodity prices. What we illustrate is that on average governance in resource rich countries is at least impervious to the price downturn and less investment, and at best, the low prices are an opportunity to refocus government on some important aspects of governance.

While there are many factors that influence governance of the sector, in Sierra Leone we do believe that the fall in iron-ore prices has created additional pressure on the Government and the companies to improve the efficiency of managing its resources, which in turn has contributed to improved governance. There is greater scrutiny of concession documentation, more focus has been placed on auditing and monitoring practices, and public finance allocations have become more stringent. Of course, this is not to say that all good governance initiatives in Sierra Leone can be traced back to the fall in iron-ore prices, nor that all aspects of good governance have improved over that timeframe.

Comment by Kathrin Russner on May 17, 2016 at 13:03
Thank you for this article. I agree that significant price falls increase the pressure on governments and may draw their attention to revenue collection. However, it seems simplistic to conclude that this necessarily leads to better governance. With massive revenue pressure and a certain level of desperation, governments’ focus rather shifts to mere numbers (tax collection targets), no matter what it takes to hit them, than (medium or long-term) measures to improve good governance. It also does not mean more efficient spending and that sectors like health or education will be prioritized “automatically” in the national. It might be interesting to analyze spending priorities in more detail.
At the same time, not all improvements regarding governance in the past five years can be attributed to the price downturn. The multi-ministerial task force in Sierra Leone which you mention in paragraph III originates from the introduction of a new cadaster system and the need to share payment receipts and consolidate data between fiscal institutions and the line ministry for mining. It is a great achievement for the Government of Sierra Leone and certainly contributes to better governance of the sector. However, the commodity price fall did not play a prominent role here.

thanks for your comment. We agree that it would be interesting to test whether a similar trend can be observed using other indicators. The main reason why we chose the CPI over other indicators was that the 2015 figure was already out, which provided another data point that we thought would be particularly relevant to include for oil producing countries in the sample. Apart from using the Worldwide Governance Indicators, it would also be interesting to use NRGI's Resource Governance Index once out, given that this indicator isolates the extractives sector. With additional data points, it may also be worth doing a more rigorous statistical analysis to test significance and causation, both aspects that we did not do for the purpose of this blog.

Thanks for this analysis. I share your view that lower prices can potentially lead to better governance as government systems need to be more effective in order to meet fiscal targets. However, I would suggest to test your hypothsis with addtional indicators. Sometimes the CPI can be misleading as it merely measures perceptions. Lower commodity prices also mean less money to corrupt officials and hence fewer corruption cases are found and reported about. That means the perception of corruption will fall even without any improvement in governance. I would be interested if the World Bank's Worldwide Governance Indicators show similar effects to those in your analysis.