Kimsegninga Savadogo, Burkina Faso’s National Secretariat Comms Officer, on why he is committed to the EITI’s potential. 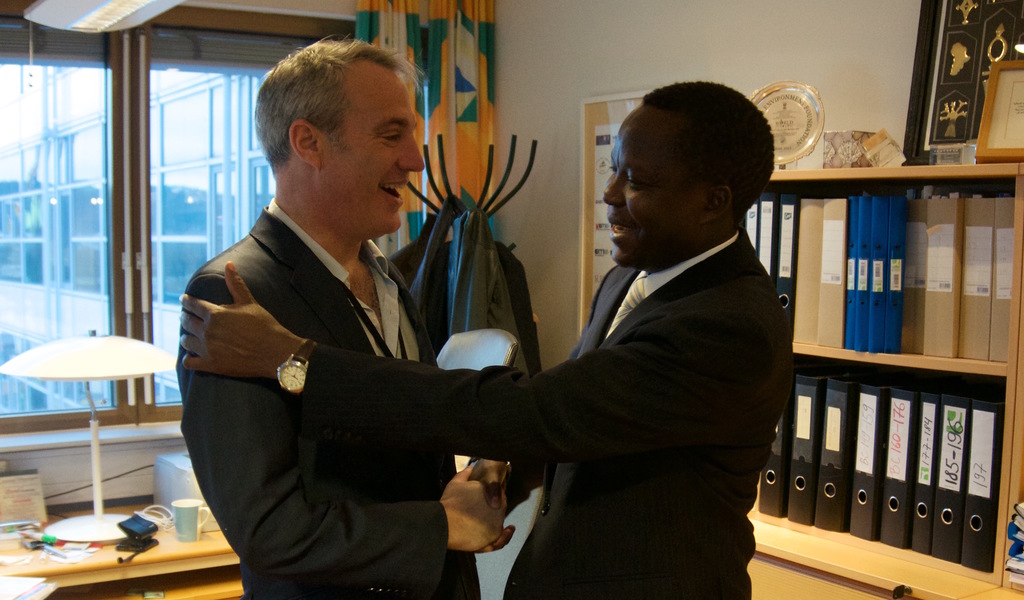 Kimsegninga Savadogo with Eddie Rich, Deputy Head of the EITI and Regional Director for Africa.

In the decade leading up to 2000, the citizens of my country, Burkina Faso, followed with great interest the development of the gold, diamond and oil sectors in other resource rich African countries. Many of these African countries were the scene of social unrest and conflicts exacerbated by the mismanagement of natural resource wealth. At the extreme end they even experienced the horrors of prolonged civil war, the root causes of which were linked to the resource curse.

As a former journalist at the daily newspaper Sidwaya (In English: Truth Came) working on the development desk I became aware of the EITI when natural resource management became a major topical issue. After all who amongst us would like to see the negative experiences of countries in my region happen to their own country? No one certainly. And who could know the risks faced by their country, understand the dangers generated by an inequitable distribution of resources and remain idle, waiting for the worst to happen? Again, no one. I am proud to say that Burkina Faso has been determined to avoid the resource curse.

I saw the EITI taking off in my country and knew that I wanted to contribute more concretely to the process, so I applied for the position of Communications Officer at the national secretariat. My first impression was that the EITI could improve governance of the mining sector in Burkina Faso and through the good management of the revenues from that sector we could reduce poverty levels. I have always believed that in order for the EITI to be a success it needs input from everyone in society, particularly rural communities that are often based near mining operations. I thought my background in communications would be useful in making the case for people to get involved in EITI processes.

"Prevention is better than cure," and the Government of my country seems to have understood this assertion by deciding very early (end of 2007-early 2008) to start the fight for a safe exploitation of the country’s mineral resources. Burkina Faso was quick to grasp the the EITIto prevent the corruption, unrest and conflict that can occur when large mining windfalls are mismanaged and also to kick-start the mining sector. Indeed, Burkina Faso’s mining sector, apart from a few old mining projects developed during the post-colonial period in Africa had been in a slump. Since late 2007 we have experienced a mining revival with the opening of Taparko mine (Société des Mines de Taparko: SOMITA) in the North Central region of the country. More mines have opened since at Kalsaka (Kalsaka Mining now closed) in the North, Inata (Société des Mines de Belahouro: SMB) in the Sahel and the Burkina Mining Company (BMC) in the Central East. Today, there are more than a dozen industrial mining companies in operation and/or under construction in the country.

EITI is not a magic key but a robust screw driver
I wanted the citizens of my country to see that the EITI is not a magic key that opens blissfully onto the yellow brick road of good governance and automatically closes any potential misunderstandings or disputes in the extractive sector. Rather, the EITI is more akin to a robust screw driver that helps countries to open up communication between stakeholders where previously there has been a lack of dialogue and ensure a consensual monitoring of extractive activity. It is a tool to optimize the benefits of natural resources exploitation through transparency and accountability.

Going forward, Burkina Faso intends to make the most from its mineral potential exploitation by injecting a dose of "EITI therapy" into its mining sector. Revenues from the Burkinabe mining sector constitute about 15% of total government revenue. It is important that mechanisms be developed to further optimize mining revenues by ensuring better monitoring and also to increase the profits of mining. Optimizing mining revenues through EITI, means taking steps to avoid the loss of revenues through embezzlement or corruption. This will also lead to better monitoring of the use of revenues to ensure they are used for the long term benefit of current and future generations.

Burkina Faso must continue to use the EITI to arm itself with proper, efficient and effective tools to entrench reforms. But reforms alone aren’t enough. Burkina Faso EITI has worked hard to inform and encourage civil society to get involved in the EITI Process. This has begun to bear fruit and people are increasingly determined to have a say after a long period of political ‘quarantine’ away from the decision making sphere.

Citizens are now pushing for their right to determine and benefit directly from the investments made from mining revenue. Burkina Faso EITI is supporting these developments by making the information contained in EITI Reports accessible in a variety of formats to as many people as possible.

Kimsegninga Savadogo has been working for 3 months at the EITI international secretariat where he has contributed to the communication team’s efforts in supporting EITI countries communication strategies.

To find out more about the EITI in Burkina Faso, visit the country page on eiti.org or Burkina Faso's EITI website.