At the Buzwagi and Bulyanhulu gold mines in Tanzania, and at the Port of Dar Es Salaam, around a thousand containers of copper-gold concentrate (a processed product between rock and refined metal) are stockpiling. They belong to Acacia Mining PLC, who operate the two mines, and are not moving because of a ban on concentrate exports that has been in place since the beginning of March.

In May, President Magufuli appointed two special committees to investigate the contents of 277 of the containers stuck at the port. The first committee reported that the concentrate contained around twice as much copper and silver, and eight times as much gold than was declared by the company (the main value of the concentrate comes from gold). They also detected a range of rare earths. According to their calculations, each container contains 28 kg of gold and is worth $1.36 million while information published by Acacia suggests that each container contains 3.3 kg of gold, 2.8 tonnes of copper, and 2.6 kg of silver and is each worth around $0.15 million. If the committees’ findings are accurate, the extent of the undervaluation would be enormous, amounting to almost $4 billion annually (one tenth of Tanzania’s GDP). The second committee scaled these figures up to cover 61,320 containers exported between 1998 and 2017, suggesting the true value of concentrate exports was $83 billion and that the government had lost $31 billion of revenue trade due to misinvoicing and transfer price manipulation. Acacia maintain that they have always declared all materials produced and paid all royalties and taxes that are due. 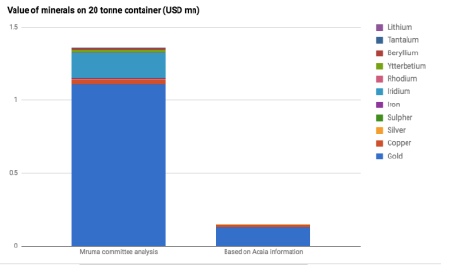 We should summon them and demand that they pay us back our money. If they accept that they stole from us and seek forgiveness in front of God and the angels and all Tanzanians and enter into negotiations, we are ready to do business.

The business in question is the demand that Acacia build a local smelting facility (the government’s stated aim for the ban on concentrate exports). In 2011, The Tanzania Minerals Audit Agency examined the viability of a smelter and concluded that it would not be profitable given the volumes and quality of concentrate involved. If the concentrate produced by the mines turned out to contain eight times more gold than previously thought, these calculations might look different.

However, the committee’s belief that they have uncovered a case of massive misinvoicing (i.e., misrepresentation of the value or quantity of exports) does not seem plausible for five reasons:

1.    The findings suggest a massive scale of hidden metals production.

The committee’s reports say that the 277 containers (which represent around one month’s production) contain around 7.8 tons of gold. This is roughly equivalent to the total amount of gold Acacia reports that these two mines produce in a year. Acacia note that the committee’s findings on the amount of Iridium in the concentrate (16.9 tonnes annually), would be nearly three times global consumption of the metal. The findings for Ytterbium (9.8 tonnes annually), would be on par with largest producer in the world.

2.    These findings are geologically implausible.

Acacia notes that the results imply that they produce (from Acacia’s three mines in Tanzania) more than AngloGold Ashanti produce from 19 mines, Goldcorp from 11 mines, and Kinross from 9 mines, and that this is implausible given the size of the mines. They also argue that economic Iridium concentrations are only found as by-products in certain types of mines, not in gold deposits of the type found at Bulyanhulu and Buzwagi, and similarly, that significant levels of rare earth elements such as Ytterbium are not found in this kind of deposit.

The Tanzania Mineral Audit Agency (TMAA) undertakes careful work to monitor minerals exports. Normally four samples are taken from every shipping container—one for Acacia (which is verified by SGS), one for the TMAA, one for the smelting company, and an umpire sample in case of disputes. Furthermore, Acacia is a FTSE250 company; it must comply with international regulatory agencies in the UK, Canada, and the United States, which require the company’s financial statements and figures to be audited in accordance with international standards. For Acacia to under-report its gold production and revenues would mean defrauding shareholders through an enormous global conspiracy.

4.    The committee’s approach to pricing the concentrate does not reflect how the metals industry works.

The committees calculated a value for every element including trace elements such as tantalum, beryllium, and ytterbium, and bulk ones such as sulphur. However, smelters do not pay out for every element in the material, but only the ones they contract for, since the rest end up in the waste pile or eventually as “anode slime” by-products at the end of the copper refining process. Acacia say they are only paid for copper, silver, and gold (and MRI Group which buys the concentrate from them confirm this).

5.    There is no sign of an additional $4 billion a year of unexplained sales in Acacia’s accounts.

Acacia’s shareholders, who have some skin-in-the-game to know what is going on, are not reacting like they have just found out that the company’s management have been defrauding them, nor that the company owns assets which are worth several times more than they thought.

While the committees’ findings are hard to believe, this doesn’t necessarily mean government isn’t justified in its concern that Acacia has not been paying enough tax. Between 2010 and 2015, Acacia paid $444 million in dividends to shareholders, despite not yet paying any income tax in Tanzania. OpenOil explains that generous fiscal terms are the primary cause, specifically, an additional capital allowance meant Acacia could deduct 100 percent of its $4 billion investment, plus a 15 percent margin, before paying any income tax.

$252 million was a “special” dividend following an initial public offering (IPO)—in other words, these funds went from new shareholders to Barrick Gold, not from the Tanzanian subsidiaries to all shareholders. However, the question of how profits to pay the rest of the dividend were available in London has never fully been answered. One possibility is that Acacia is engaging in “base erosion and profit shifting” via its Group Finance Company in Barbados. Acacia may be raising equity, and, through the Group Finance Company, providing it as intercompany loans to its Tanzanian subsidiaries. Because interest payment on the debt can be deducted from taxable income, the more debt the mines have the less taxable income they generate. Plus, interest payments are a way of shifting profits earned in Tanzania, to the Group Finance Company in Barbados. This practice of “earnings stripping,” could explain how Acacia financed the dividends. But, without access to disaggregated data for finance charges, it is not possible to know whether this theory is correct.

In Tanzania, there is significant risk attached to challenging the committees’ findings. The Minister of Mines and the chief of the TMAA were both fired following the first committee’s report, and a weekly magazine was ordered to shut down for two years after publishing an article questioning the role of previous presidents in negotiating the original mining agreements. The “Publish What You Pay” coalition of NGOs working on extractive industry transparency report has issued a general statement, but has not offered any analysis, while the Tanzania Extractive Industry Transparency Initiative has made no public statement.

It is not clear that compelling Acacia to build a smelter would be a win for Tanzania. Thomas Scurfield at NRGI warns that it would distract government attention and power supplies from other areas of the economy and might result in lower government revenues, not higher, if the marginal increase in export value it generates is offset by higher costs. Without balanced coverage of the issues related to revenues, and the economic prospects for smelting, Tanzania may end up worse off. To date, media coverage of the situation has been unbalanced, and potentiall...

Securing mining revenues is a major challenge for Tanzania, as with other resource-rich developing countries. Often governments know something is wrong, but lack the information, resources, and expertise to pinpoint the precise cause. However, it is vital that public debate is informed and critical, and that simplistic narratives portraying multinational mining companies as undertaking massive ‘illicit financial flows’ through widespread mispricing of ores and metals are not accepted without evidence. Governments should also avoid this trap at risk of raising public expectations of mining revenues to unsustainable levels.

Acacia and the government are now sitting down to talks with the hope of reaching a “win-win” solution. Finding a way to unwind inflated expectations, build trust and effective, realistic public scrutiny will be critical to finding a solution which is not just win-win for the president and Acacia but also for the people of Tanzania.

Alexandra Readhead is an independent advisor on international tax and extractive industries. Maya Forstater is a Visiting Fellow at the Centre for Global Development.

In the latest twist of this Acacia Mining (headquarters: London) and Government of the United Republic of Tanzania saga, the mass-circulation Daily Mail (circulation approx. 1.5 million, headquarters: London) refers to Tanzania's largest city, Dar es Salaam (population approx. 4.5 million) as a "fishing village", no doubt an innocent and unintended mistake but equally an eye-raising one too.  NB: I am not suggesting an link between Acacia Mining and the Daily Mail, aside from that they both are HQed in the same city... which no doubt was a fishing village once, too!

I would be particularly interested in hearing the views of Tanzanians on this story :-)

This is a very important topic, and congratulations to all three of you for posting on it.  I note that there are two current GOXI posts, one started by Maya and Alexandra - and the other by yourself, Antipas.  For simplicity and economy I post the same response herein to both.

Firstly, then, an update - Barrick Gold Corporation has taken over the negotiations with the Government of the United Republic of Tanzania (Tanzania), with any agreement subject Acacia Mining's shareholders. Beneficial ownership context: "Acacia Mining plc is a company listed on the London Stock Exchange that owns gold mines and exploration properties in Africa. Barrick holds a 63.9% equity interest in Acacia."  Whilst these negotiations happen, arbitration proceedings have now been triggered.

“The Government will not allow direct exportation of minerals from the mines to other countries and instead it will establish clearing houses at the international airports, mining areas and other appropriate areas where the minerals will be verified and issued export permit before being exported. The Government will impose a clearing fee of one percent of the value of minerals”

Many thanks to the authors of this very well founded alternative view of developments in the Tanzania Government’s handling of suspicious ACACIA ‘s mineral concentrates on export, I consider enables many of us to better understand facts on the matter.

I expected all mineral development agreements between governments and investors would have clauses which address the solving of disagreements/disputes (in view of ensuring approach is the one which generates legally binding solutions/judgements most  efficiently in terms of time and costs);

and disclosure of information (in view of ensuring disclosed information is legally correct, and its disclosure won’t cause baseless and/or unnecessary damages to any party in the agreements, including in front of the eyes of public).

And that, compliance to such approach could have been ACACIA and the Government would jointly handled the re-sampling of the suspicious concentrates to generate results which are legally binding straightway, hence enable the generation of legally binding solution/judgement to be the most efficient in terms of time and costs, and a disclosure of information on the disagreement/dispute is useful rather damaging to a party or parties (including in the eyes of public), or misleading public unnecessarily.