Nearly 70 percent of people living in poverty are in countries whose economies are driven by their endowment of resources such as oil, gas, and minerals. If these economies handle their resource wealth wisely, they could lift 540 million citizens out of poverty by 2030—about as many people who have left the ranks of the poor in China since its economic renaissance began. But that’s a big if.

We define “resource-driven countries” as those economies where the oil, gas, and mineral sectors play a dominant role, using three criteria: (1) resources account for more than 20 percent of exports; (2) resources generate more than 20 percent of fiscal revenue; or (3) resource rents are more than 10 percent of economic output. In 1995, there were 58 resource-driven economies that collectively accounted for 18 percent of global economic output. By 2011, there were 81 such countries, accounting for 26 percent of global economic output. Resource-driven countries, in general, have not done a good job converting their resource wealth into long-term prosperity. Almost four out of five of them have below-average levels of per capita income. Since 1995, more than half of these countries have failed to match the global average per capita growth rate. Only about a third of countries have sustained economic growth beyond their initial resources boom. They have done an even worse job of translating economic growth into broader prosperity. In Zambia, for instance, poverty levels increased from 2002 to 2010 despite strong economic growth.

These countries may be among the poorest in the world, but they also have a significant share of global resources. Almost half of the world’s estimated mineral and oil and gas resources are in non-OECD, non-OPEC countries. This share could be substantially higher—we just don’t know because relatively little exploration has taken place in low- and middle-income countries.

It is vital that they seize their moment if they are to make the most of future demand for resources. A recent report by the McKinsey Global Institute (MGI) —Reverse the curse: Maximizing the potential of resource-driven countries—estimates that between $11 trillion and $17 trillion of new investment in oil and gas, and minerals will be needed to meet demand and replace existing sources of supply by 2030. In the past, almost 90 percent of investment in resources was in high-income and upper-middle-income countries. But the share attracted by low-income and lower-middle-income countries could potentially almost double to $3 trillion. On an annual basis, that’s more than triple what these countries currently receive each year in aid (Exhibit 1). 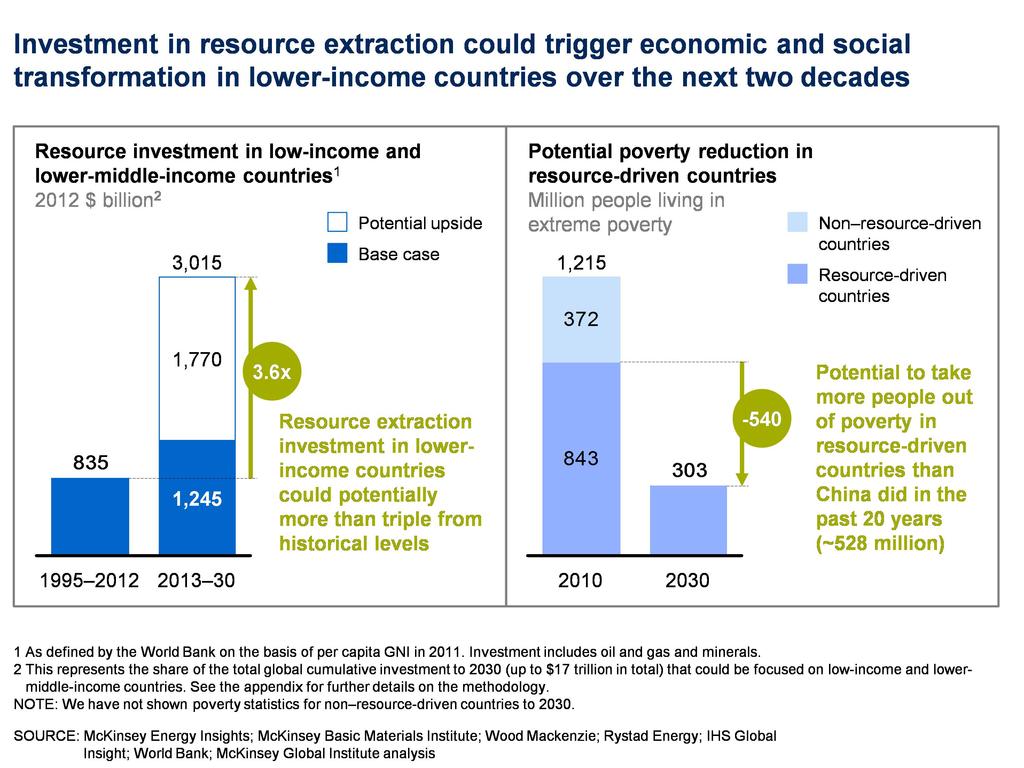 The 20th century model of resource development will not capture this opportunity to transform sub-soil wealth into long-term prosperity. Some resource-driven countries are trying to emulate the approach of the Asian Tigers by developing a strong manufacturing sector and moving up the value chain. But we don’t see this as the answer. We propose instead a “resource tiger” model, tailored to each country but always centered on three imperatives: effectively developing the resources sector, capturing value from it, and transforming that value into long-term development. MGI’s report looks at six aspects within these imperatives: institutions and governance, infrastructure, competitiveness and fiscal policy, local content, spending a resources windfall, and economic development.

There is nothing radical about what we propose: there are examples of best practice on all these dimensions. The imperative is to attain that best practice. Take local content. Between 40 and 80 percent of the revenue created in oil and gas and in mining is spent on the procurement of goods and services. This exceeds the value of tax and royalties in some cases. Ninety percent of resource-driven countries have some form of local-content regulation, but a lot of it is badly designed. The Democratic Republic of the Congo is a case in point. The government requires 96 percent of jobs in mining and 98 percent of management positions to be filled by its own nationals—but simply doesn’t have enough people with the skills and experience to meet these targets.

Another example is shared infrastructure. Resource-driven countries will together require more than $1.3 trillion of annual total infrastructure investment over the next 17 years to sustain projected economy-wide growth. This is almost quadruple the annual investment that these countries made during the 17-year period from 1995 to 2012. Extractive companies are major investors and developers of infrastructure, and they are expected to invest almost $2 trillion in infrastructure in resource-driven countries in the period to 2030. Given the huge need, we believe that resource-driven countries should look closely at ways of sharing infrastructure. We estimate that nearly 70 percent of investment in resource infrastructure could potentially be shared among different operators, and we see the largest opportunities in power in mining areas and pipelines in oil regions. The remaining 30 percent could potentially be shared between industry and other users. Examples include building roads that allow other users to benefit or ensuring that power capacity is sufficient to provide excess power to the grid. Of course, governments must carefully evaluate the likely costs and benefits of infrastructure sharing case by case. Overall it appears that power projects are good candidates for sharing as the benefits are high and coordination costs low. But port and rail projects, while often having substantial benefits, can create high costs related to sharing and therefore must be particularly carefully reviewed

Most fundamentally, governments need to work in genuine partnership with extractive companies—and vice versa. Neither will benefit if their relationship continues to be scarred by tension and mutual suspicion.

Fraser Thompson is a Senior Fellow at McKinsey Global Institute (MGI), based in Singapore

Thank you for sharing your point of view, Mulya Jules. Mine on the same is a little bit different.

It is Africans and their governments should be blamed wholesale because the multinationals are here to exploit the favourable conditions in place and overcome obstacles in their missions to maximize own take in their led extraction of mineral resources in the developing countries. It is the responsibility of Africans and their governments to create fair taxation regimes and manage them effectively to ensure the multinationals and all other private companies exploiting their mineral resources are paying deserved taxes and no loopholes they could exploit to evade paying taxes,  no loopholes individuals in the government could exploit for bribe taking to facilitate non-payment of taxes, and the revenues earned are well invested to maximize benefit for all in their generations. Africans are to blame for failure to put competent and responsible governments in place, and the taxation regimes which are not effective with regard the need to maximize home take and its investing for the economic growth of their countries.

Some of the responsibility of these unacceptable levels of poverty in many resources-driven economies lies with multinationals based in first world countries which invest in poor countries. These companies have, over the years, developed very sophisticated ways of avoiding paying the right amounts of tax and mineral rents to host countries. The Africa Progress report of 2013 names corporations such as Glencore that practice under-pricing and other highly questionable tricks to pay less tax to their host. The one and half billion USD stolen from the DRC copper and cobalt assets between 2008-2012 could never have happened without the complicity of big banks and their allies in international business.

One other very disturbing thing  is the fact multinationals are no longer keen to invest in infrastructure that can build a sustainable future for their host after the resource is depleted. They'd prefer to bring in, for example, gensets and import million of liters of fuel during the lifetime of the project rather than build hydro-power plants. In addition their engineers operate on a roster basis...they have even now extended the practice to senior staff. This isn't always  well perceived by communities their zone of influence who see these people fly in and out...sooner or later suspicion  creeps in...potentially posing a serious threat to  community relations (Social License to Operate).

Having said this, I have to acknowledge that the buck stops with those running these resource-driving economies who are often far too corrupt to resist the temptation of quick self-enrichment offered to them in deal negotiations with some dishonest multinationals and, to make a bad situation worse, they send unqualified people to negotiate with multinationals.

‘Between 40 and 80 percent of the revenue created in oil and gas and in mining is spent on the procurement of goods and services’. Good, If consider provision of goods and services is always going for profits when mine owning sometimes make them or not (depending on prices of end products on the world market), it could be concluded that corporate taxes for the host countries should mainly come from the providers of goods and services who eat up more of the revenues generated than from the mine owners, and accordingly constitute not less than 40-80 % of the total taxes host countries earn from operating mines. I’m afraid most host countries in the developing world are not collecting them from the goods and services providers other than the salary earners and should collect to maximize deserved home take. Also think local (State, private) sectors participation in all upstream activities is possible and one of the most important in the optimization of home take because such enables a quick local benefit accrued from sale of shares in successful finds for investing in the downstream provision of goods and services which is often more rewarding than ownership of mine shares. And, if consider foreign multinationals are often involved to maximize foreign take in the appraisal and extraction of strategic mineral deposits like oil and natural gas on the African continent, it could also be concluded that collaboration of African countries in the mobilization of seed capital for African participation in the appraisal and exploitation of the same could also be exploited to maximize home take on the African continent.